A Trade Show Strategy Plan for Outside the Booth

When devising a trade show strategy plan, there’s good reason to focus on your booth. After all, it’s your marketing home base, and your best opportunity to attract prospects with an offer that speaks directly to their needs and desires. 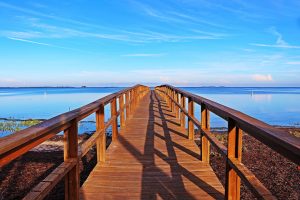 But sometimes it’s important to venture off the island and explore everything else the trade show event has to offer. A well-designed trade show strategy plan leverages every available opportunity to connect with prospects in and outside the booth.

For the best advice on how to take advantage of every ounce of a trade show event—including those trips to the restroom—we consulted with our very own Strategic Partnership and Trade Show Ninja, Kelly Kenney.

When devising a trade show strategy plan for meeting prospects outside the booth, Kelly does her pre-event homework by reviewing all the content tracks that are being offered and identifying specific workshops she believes will attract her target prospect.

Kelly does an evaluation and determines which workshops she believes her prospects will attend, where her competitors might be, and which of her partners are presenting. All this goes into her trade show strategy plan for the event.

Wherever she is at a workshop or content event, Kelly’s eyes are always on the crowd. She scans the room and makes special note of who is in attendance. In her experience, there’s huge value in being able to connect with someone later on by saying: “Hey, what did you think of that session?”

The ability to connect over a shared experience has the power to immediately move a conversation away from icebreaker topics and right into building a meaningful connection. 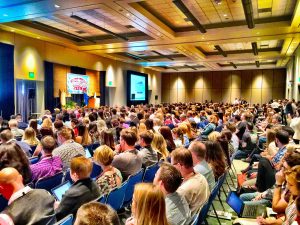 Kelly doesn’t limit herself to the audience; she looks at speakers, panelists, and moderators as well. For those of particular interest, she sends them a LinkedIn message before the show letting them know she’s interested in their topic, plans on attending their event, and requests a meeting to follow.

Kelly also doesn’t limit her prospect search to workshops and she’s not afraid to admit that the restroom is sometimes the best place to have a really good conversation.

“Because most events are male-dominated, it’s a chance for women to relax. You’d be amazed by the great conversations you can have in the restroom.”

Outside of the restroom, Kelly looks to connect with anyone, anywhere whose wearing a badge. She calls it the lottery system of networking because these are not necessarily people she’s targeted as potential prospects. Rather, these conversations may ultimately be helpful in the future.

“You don’t know who they know or what you’ll glean from these conversations but it’s always interesting to learn about their industry experience. It’s the random gifts that you receive from being alert and engaged at a show.”

Click here for more advice from Kelly on the value of keeping open and staying focused on the trade show floor.

We interviewed Kelly on October 23rd as part of a series we’re offering at MEET: Coffee and Conversation. Inform your trade show strategy plan with more expert advice from Kelly Kenney, Strategy Partnership and Trade Show Ninja by tuning into our full interview here.